Now that Qualcomm has unveiled the new Snapdragon 8+ Gen 1 chip, it’s time for smartphone manufacturers to unveil it.

OnePlus, Realme and Asus have already confirmed new terminals with this chip, but Xiaomi and Samsung may also introduce new tops with Qualcomm processor. We have prepared a list of the new smartphones that will arrive equipped with the improved version Snapdragon 8+ Gen 1. 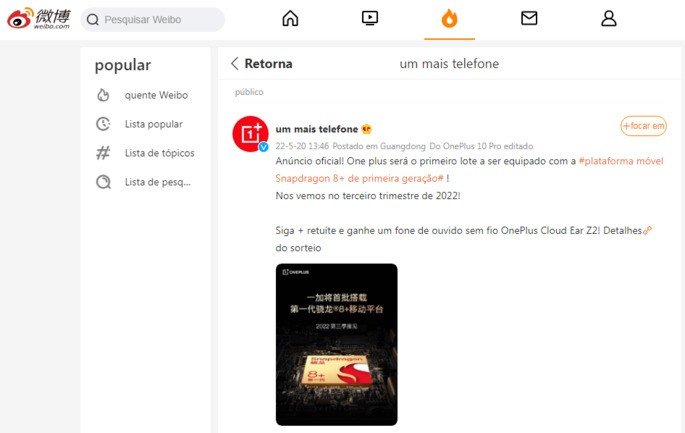 On the Chinese social network Weibo, OnePlus has confirmed that it will launch a smartphone with the Snapdragon 8+ Gen 1 chip. September.

But in addition to the now-confirmed chip, few details are known about the upcoming OnePlus flagship. The terminal is expected to offer support for 150W fast charging, as the brand has already integrated it into another terminal available in the Chinese market for the Ace series.

Another advanced rumor is that the OnePlus 10 Ultra will be the brand’s first device to include a pop-up lens in the rear camera setup, plus the optical part should bear the Hasselblad seal. 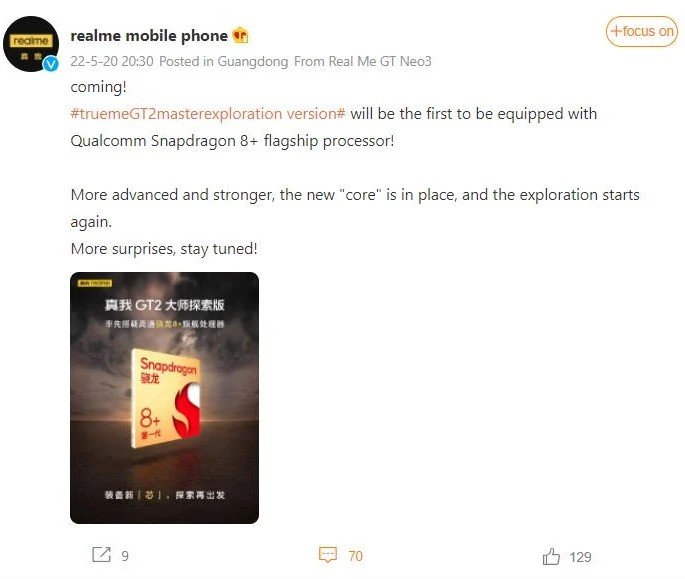 Like OnePlus, Realme has also used the social network Weibo to confirm that the new GT 2 Master Explorer will feature an improved version of the Qualcomm chip.

But the brand did not provide a release date or reveal the specifications. On the other hand, there are also no rumors presenting what we can expect to see in this new Realme terminal.

The only information available is that the design was in charge of the Japanese Naoto Fukasawa, who has already collaborated with Realme on the design of other terminals. Also advanced is the fact that the back panel of the smartphone is very comfortable to use, as it simulates the feel of touching paper.

In turn, Asus announced on the social network Twitter that the new gaming smartphone ROG Phone 6 will arrive with Snapdragon 8+ Gen 1.

According to the information released so far, thanks to the integration of this chip, the Phone 6 will have 15% higher performance and energy efficiency than its predecessor.

In other words, with the new Asus ROG Phone 6, users will get an additional 70 minutes of battery life for gaming and another 14.5 hours of music playback. Values ​​that promise to conquer the market.

There is no information available about other technical specifications or the release date of the device, but we should be able to come up with more details over the next few weeks.

Xiaomi has not confirmed which of its smartphones will feature the Snapdragon 8+ Gen 1, but it looks like it will be the model aimed at shooting 12 Ultra.

The device with this chip is expected to arrive with the controls and pair them with up to 16GB of RAM and up to 512GB of internal storage.

The visual part will be one of the strongest arguments in this terminal. The triple rear camera setup will have a 50MP Sony IMX989 sensor. The remaining sensors will be a 48MP ultra-wide and a telephoto sensor also with 48MP and 120x digital zoom.

For the rest, it will have a 6.73-inch screen with 2K resolution and a dynamic refresh rate of up to 120Hz. The Xiaomi 12 Ultra will be powered by a 4900mAh battery with 120W fast charging support.

In August, Samsung is expected to release new foldable devices which include the Galaxy Z Flip4. Recently, Ice Universe leaker revealed that the device, which is equipped with a Snapdragon 8+ Gen 1 chip, has passed through the GeekBench platform.

In addition to incorporating the enhanced version of the Qualcomm chip, the foldable device should also have 8GB of RAM and 128GB and 256GB internal storage variants.

Other rumors have also developed that the device will arrive with a larger battery, now 3700 mAh, which will support 25W fast charging.

The other foldable device from Samsung arriving in August is the Galaxy Z Fold4 which is also described as having a Snapdragon 8+ Gen 1 chip.

Apparently, Samsung will also change the design of the double hinge to the single hinge mechanism, to make this foldable a more compact and powerful device.