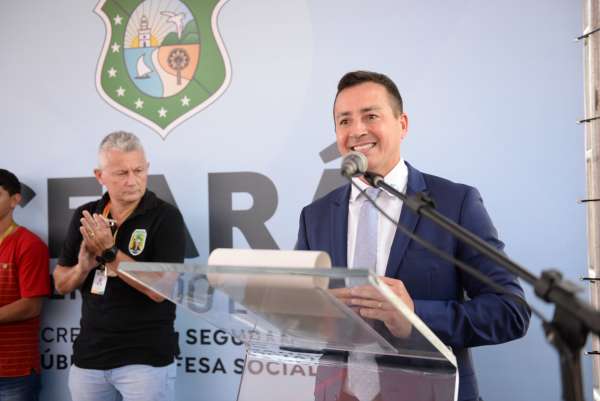 Anniversaries of the Secretary of Public Security and Social Defense of the State of Ceará (SSPDS/CE), on 25 years of service to the people of Ceará, included a special exhibition, the SSPDS World Fair, an event that took place on Friday (20th), with an extensive program targeting students from Colégio Militar do Corpo de Fogo Escritora Rachel de Queiroz (CMCB), from Colégio da Polícia Militar do Ceará General Edgard Facó and from schools around the Secretariat Building, as well as for representatives of the Community Councils for Social Defense (CCDS) in the Metropolitan and Metropolitan District of Fortaleza.

“It is a very important date marking a quarter of a century of full effort for those in the security forces, and those who have gone through the general security of the state in these twenty-five years of history. It is important to note that this is the last major event at the present SSPDS headquarters. We will have a new chapter. , with the Public Security Command of the Integrated Center for Public Security (CISP), the Ceará government’s largest investment in security. The festivities do not end today, but will continue until May 31 with food being collected for the food campaign as we did last year for families in the most vulnerable areas. And this measure has This social perspective and the strategy of rapprochement with the community so that the collected food is distributed to those who need it most,” stressed Ceará’s Minister of Public Security, Sandro Caron.

At the opening of the exhibition, The finalists of the 1st Futseg Cup received medals and prizes for 1st, 2nd and 3rd places from the men’s indoor soccer competition held on the 16th and 17th, at the SSPDS Sports Arena. The SSPDS Intelligence Coordination Team (Coin) took the 3rd place in the competition, taking the bronze medal, the Integrated Air Operations Coordination Team (Ciopaer), and the 2nd place in the competition with Silver Medals, Cup and Gold Medals for Organic Security Coordination. and Logistics Services (COSOL).

All sectors of the ministry and its subsidiaries came together to promote a party that welcomed the public and demonstrated the role of public security in Ciara’s life. The SSPDS anniversary honor came from the professionals themselves. General Officer Luciano Freire, Information and Communication Technology Coordinator (COTECH), said employees in his sector took part in a presentation during the fair. The Cotic band brought in a lot of rock, jazz, and blues music.

“We all took part in this event to give a beautiful party. On this special day, we celebrate the 25th anniversary of the Secretariat by giving a presentation to the audience and our co-workers,” emphasized Cotic Coordinator, Luciano Freire.

The program continued with Aulão for best age, given by the Center for Training and Human Development (CTDH) of the Ceará State Military Fire Brigade (CBMCE). aulão aims to delight residents through the Health, Fire and Society (PSBS) program, which assists in (low-impact) physical activities for people of the best ages. 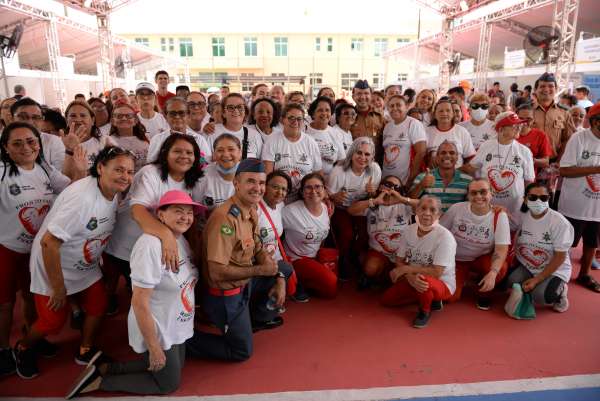 The SSPDS World Expo witnessed the celebrations of the volume and linked its institutions 12 situations ranging from a timeline telling the history of the Secretariat to presentations by SSPDS advisors and coordinators, In addition to the Civil and Military Police, Fire Department, Forensic Expertise, State Academy of Public Security (Aesp/CE) and Ceará State Supervisory Authority for Research and Public Security Strategy (Supesp). This moment was special for everyone, as the last was in the current headquarters in the São Gerardo district, until the transition to the Integrated Center for Public Security (CISP) at the airport.

The exhibition began at 9 am, when staff and staff were the first to visit the exhibition, which was held at the SSPDS Court. Students from Colégio Militar do Corpo de Fogo Escritora Rachel de Queiroz (CMCB), Colégio da Polícia Militar do Ceará General Edgard Facó, the Third Military Police College Tenente Mário Lima and the schools surrounding the Secretariat Building, as well as representatives of the Social Defense Community Councils recognized ( CCDS) on the history and work developed by the Ceará Public Security.

“At this event, we learned about the history of the Secretariat and the work done by the SSPDS specialists for the residents of Ceará. The SSPDS is a partner in the actions we take in our municipalities, in addition to being a link to get closer to the citizen”, explained the President of the Community Council for Social Defense (CCDS) In Auropuritama, Antonio Vitosa Gama.

One of the most visited stands has been the SSPDS Timeline, which recounts the history of the volume from its creation in 1997 to the present, with images and text recounting every step the volume took. Exhibitors also include Communications, Information and Communication Technology (Cotic), Integrated Security Operations (Ciops) and Integrated Air Operations Departments (Ciopaer). In these three mentioned, people learned about the technologies used by the Ciara Public Security, as well as about the work that Ciopaer/SSPDS aircraft and their specialists do. Another sector of SSPDS, whose work has been presented, is the People Development and Management Coordination (Cogep), which is responsible for managing the servers and collaborators that make up the volume. Also present was the Pavilion Disque-Denúncia / Ouvidora, aqueducts that enhance the relationship between the Ministry and the population. 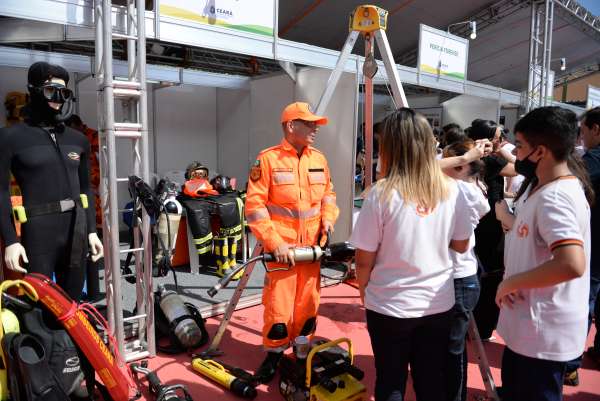 “I was very surprised by the exhibition. What intrigued me the most were the PC-CE, PMCE and CBMCE vehicle exhibitions. I visited all the stands and got to know the work of the secretariat and we were well received by all the professionals. Caroline Bezerra, a third-year student at the Military Police College General Edgard Vaco said In Ciara, “This exhibition has awakened my dream of working in Public Security.”

Using art as a tool to educate and promote the prevention of violence, crime and drug use, the Military Police of Ceará (PMCE) has a music group that performs on Friday afternoons. In addition to the technical presentation by the Chief Ministers, teams from the Coordination of Information and Communication Technology (Cotic / SSPDS) and the Ceará State Military Fire Brigade (CBMCE) also participated in the event. 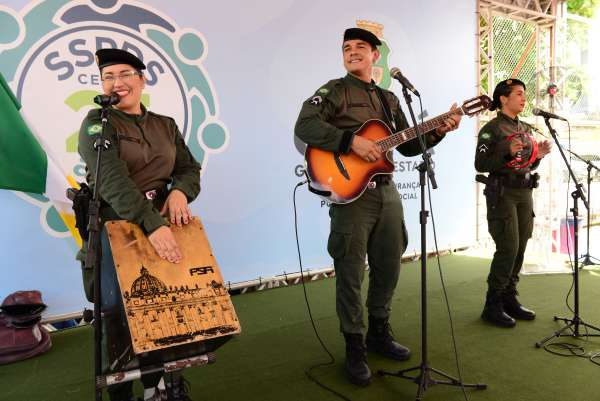 The fair attracted military school students with kennel shows. After all, Ceará’s security forces aren’t made up of human heroes alone. SSPDS also counts on canine support which undoubtedly brings the blessing of work. Even with all this kindness, pets are very committed to serving, helping to solve crimes, save people and find illegal materials. During the SSPDS World Fair, PMCE, CBMCE and Civil Police demonstrated some animal skills through presentations during the fair. 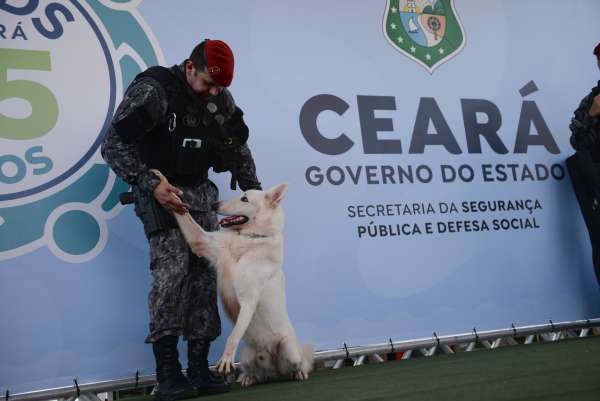 During the event, teams from the Ceará State Military Fire Brigade (CBMCE) conducted a rescue simulation at altitude with the support of a zip line. The case was registered at the institution’s headquarters. Curious eyes followed the entire procedure. The purpose of this measure was to make clear to the public flexible and comfortable rescue methods for those rescued at heights. The simulation was supported by firefighters trained and capable of this type of work. The pressed line was anchored from the floor to the first wall of the water tank, located in the niche of the volume (about 12 meters high). The simulation took place at 11 am, and the descent from the water tank to the ground began. The person who simulated the victim was placed next to an officer on a lifeline suitable for immobilizing the body. 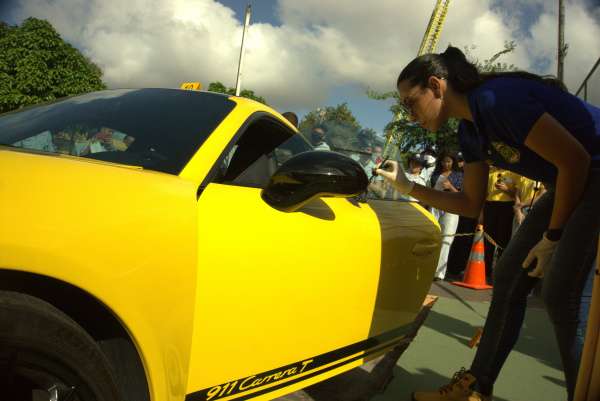 One of the most awaited moments for visitors included teams of forensic experts of the State of Ceará (Bevos) and Civil Police with the experts and Civil Police performing in an expert crime scene simulation. The operation took place in a Porsche Carrera, which was seized by the civilian police.

Today’s program culminates in a ceremony to award the “General Assis Bezerra” medal. Honor will be delivered from 17:00. The ceremony will see the handing out of ten medals, in addition to 40 certificates of related services provided to professionals, including servers and employees, from the security system who have excelled in the exercise of their functions over the past year.

The anniversary month schedule ends with food deliveries for the third edition of “Campanha AlimentAÇÃO”, which will run until May 31. The volume initiative aims to collect inputs that will be donated to socially vulnerable families in the capital.

To collaborate, participants can donate non-perishable food, such as; 1 kg of rice, 1 kg of sugar, 1 kg of beans; 1 kg of flour or two packages of pasta. Entries are received through May 31 with the participation of servers, security department personnel and related bodies. The campaign will also be open to the public.

The place to receive food is the SSPDS headquarters, located on Av. Bezerra de Menezes, 581, São Gerardo, in Fortaleza. Those interested in participating must submit their donations to the Coordination of Personnel Management (Cogep) from 8 a.m. to 5 p.m. For more information, call (85) 98406.9727 or send an email to cedep@sspds.ce.gov.br.