In his 25 year of service to the people of Ceará, the Ceará State Secretary of Public Security and Social Defense (SSPDS/CE) celebrated the “Silver Wedding” with a program targeting servers, staff, students, and representatives of Community Councils for Social Defense (CCDS) in the Metropolitan and Metropolitan District of Fortaleza. On this anniversary, the Secretariat is holding its events at the SSPDS headquarters, at Avenida Bezerra de Menezes, 581, in the São Gerardo neighborhood, in Fortaleza.

On Monday, May 16, the portfolio completed 25 years of existence, about to move to the new headquarters at the Integrated Center for Public Security (CISP), whose first phase was delivered by then-Governor Camilo Santana, on May 1. April of this year. The new building will house the administrative headquarters for the various areas of SSPDS activity, in the Aeroporto district.

Thus, this will be the last year at the headquarters located in the São Gerardo district. So, to celebrate last year’s history in the current building, the schedule is carried out in the anniversary week at the SSPDS stadium, between May 16-20, with the I Futseg Cup, the SSPDS World Fair and the celebration with the awarding of the “Assis Bezerra” Medal and the Certificate of Related Services Provided . 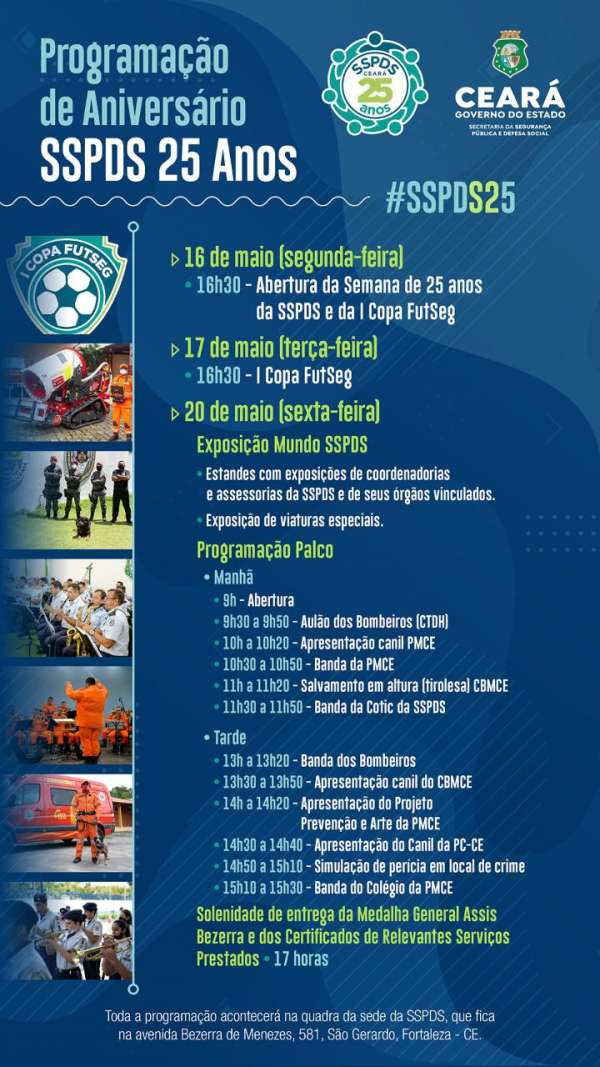 The program begins on Monday (16), 4:30pm, with servers and staff participating in the first Futseg Cup, which takes place on May 16-17, at the File Stadium. There will be two days of matches with eight teams made up of professionals from Coordination of Intelligence (Coin), Integrated Security Operations (Ciops), Personnel Development and Management (Cogep), Organic Security and Logistics (Cosol), Information and Communications (Cotic) and Integrated Air Operations ( Ciopaer) from SSPDS.

On Friday (20), the department will hold the SSPDS World Exposition, which targets students from the Military College of the Escritura Fire Brigade Rachel de Queiroz (CMCB), the General Military Police College Edgard Vaco in Ceará and surrounding schools. , as well as representatives of the Community Councils for Social Defense (CCDS) in the capital and the Fortaleza metropolitan area, among other guests. The event schedule will start at 9 AM and end at 3:30 PM. The fair will feature 12 pavilions with exhibitors from SSPDS Coordinators and Consultants, Ceara State Civil Police (PC-CE), Ceara Military Police (PMCE), Ceara State Military Fire Service (CBMCE), Ceara State Forensic Expertise (Bevus), and the Academy of The State Public Security of Ceará (Aesp) and the Supervisory Authority for Research and Public Security Strategy (Supesp).

The exhibition also contains the “SSPDS History” pavilion, which highlights the ministry’s 25-year path, in a timeline, beginning with the creation of the Secretariat for Public Security and Citizenship Defense (SSPDC), out of law. 12,691 of May 16, 1997, amended by Law 17,734 of December 2, 1997, which strengthens Ceará’s Public Security Command. In parallel, there is an exhibition of vehicles and a special program on stage, with performances of military bands, kennels of the security services, among others.

The program culminates on the 20th with a “General Assis Bezerra” medal ceremony. Honor will be delivered from 17:00. This honor was designated the SSPDS’s Greatest Medal by Decree No. 28,451 of November 1, 2006. The medal was created to distinguish civilian or military persons and entities, military firefighters, Pefoce employees, civil and military police, who, attest, have cooperated honorably in the development of the activities of the Special Secretariat. The ceremony includes the delivery of ten medals, in addition to 40 certificates of related services provided to security system professionals, who have distinguished themselves in the exercise of their functions over the past year, as well as to people who have contributed to the work of SSPDS-CE. During the ceremony, the teams that excelled in the I Futseg Cup will receive the 1st, 2nd and 3rd place medals.

The anniversary month schedule ends with food deliveries for the third edition of “Campanha AlimentAÇÃO”, which will run until May 31. The volume initiative aims to collect inputs that will be donated to socially vulnerable families in the capital.

To collaborate, participants can donate non-perishable food, such as; 1 kg of rice, 1 kg of sugar, 1 kg of beans; 1 kg of flour or two packages of pasta. Entries are received through May 31 with the participation of servers, security department personnel and related bodies. The campaign will also be open to the public.

The place to receive food is the SSPDS headquarters, located on Av. Bezerra de Menezes, 581, São Gerardo, in Fortaleza. Those interested in participating must submit their donations to the Coordination of Personnel Management (Cogep) from 8 a.m. to 5 p.m. For more information, call (85) 98406.9727 or send an email to cedep@sspds.ce.gov.br.