Atevi is the 100% electric bus model from Marcopolo

He traveled the world on a sailboat and ventured into many fields, from exporting shoes to manufacturing boats. Thirty years ago, he founded a company in Argentina to ride the wave of the newly created Mercosur. In 2017, he combined these experiences to take charge of the family business: Marcopolo, the largest manufacturer of bus bodies in Brazil. James Bellini, 62, recounts how he pledged to carry on the legacy of his father, Paolo Bellini, who transformed his painting workshop in Caxias do Sul (RS) into an industry of international reach.

In the early 1990s, having spent the past decade exporting shoes, the eldest of the three children of the founder of the company decided to take advantage of the opportunities offered by the fledgling Mercosur, together with Argentine partners, to strengthen exchanges between the two countries – mainly related to products to the footwear sector. He soon had the idea to suggest to his father – who agreed – and the partners to include the buses in the trading portfolio. “So, from the age of 32 to 37, I was a trade representative in Argentina. At the end of that period, after selling a thousand buses, Marcopolo’s managers invited me to go back to Brazil to take care of exports.” accepted.

Read more: The US spends more than $3 billion on electric car batteries

Ten years later, in 2006, he thought it was time to sail to other seas. “I set up a shipyard in São José dos Pinhais, near Curitiba, and for six years we have been making high quality craft boats. Even today our boats are sought after. But, while interesting, the new activity was not the fulfillment of his biggest dream “There was one thing I could not die without doing: to sail around the world.”

One day, when a 44-foot-tall prototype was completed, he realized he had a great opportunity. He finished the boat, and between July 2014 and December 2016, he had the “richest” experience of his life alongside one of the crew. He came back with lessons in his bags. “I learned that planning is key, but it is essential to know that there will be unforeseen events and that it is necessary to know how to deal with them. I also learned that when you really need it, it is not money, it is not a position that you need. It belongs to the people who are by your side and are willing to help.” 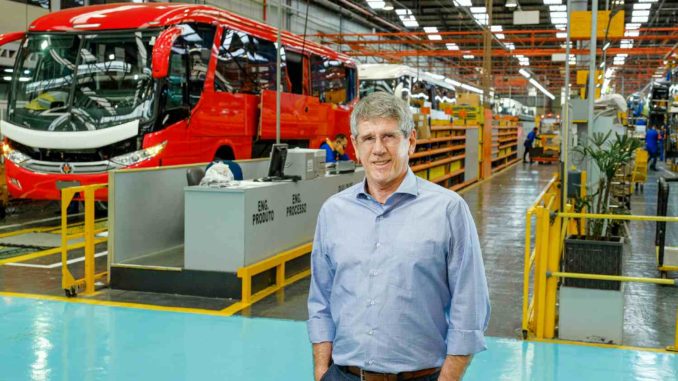 James Bellini is CEO of Marcopolo

Shortly thereafter, in June 2017, Paolo Bellini passed away at the age of 90. James says, “Emotionally, I knew I needed to return to the company for my other mission on earth: continuing my father’s legacy.” He became Chairman of the Board of Directors and interim CEO. Then came the epidemic. The road market, our strong point, is gone.” He had to lead Marcopolo through the storm. In the past two years, the company has reorganized its operations in Brazil and abroad, reduced fixed costs by 30% and maintained positive results even after a nearly 50% decrease in the size of bodies Produced in the country, it paid good dividends in 2020 and 2021 and saw its market share reach 57% in 2021.

Marcopolo has completed the approval process for ATVI, the 100% electric bus. “This is a milestone in our history: it is the first fully certified electric bus in Brazil,” the businessman celebrates, adding that 30 units should be produced by the end of the year. Also during the pandemic, among other initiatives, it launched the Marcopolo Rail division, which focused on light rail vehicles, and the new generation of highway vehicles, recognized by the International iF Design Award 2022, as well as the Attivi. The company announced the reuse of one million bottles of PET used in the production of components for some models. These projects received an investment of R$238 million and received James Awards such as AutoData 2021 (was a winner in the Business/Supplier Leadership category) and the ADVB/RS Marketing Personality Award.

“The future of urban mobility points to electric vehicles,” assesses James, also referring to trams, which are able to carry more passengers at a lower manufacturing cost than the subway. And he celebrates a real step toward that future: “The plane at Guarulhos Airport will have the body of Marcopolo.”

*Brand Voice It is the exclusive responsibility of the authors and does not necessarily reflect the opinion of FORBES Brasil and its editors.